The Return of Goddess Consciousness and the Divine Feminine Trinity 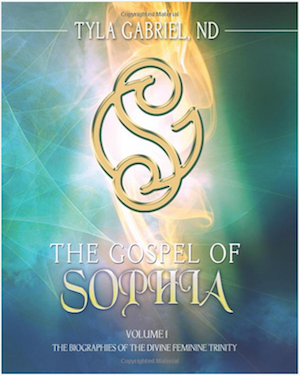 The Gospel of Sophia by Tyla Gabriel aligns wonderfully with many of the recent and revelatory writings about the Divine Feminine.  Tyla’s divinely inspired narrative brings deep meaning and penetrating insight to the ever-emerging Divine Feminine reality.  Her revolutionary thesis is both spiritually grounded in time-honored religious traditions and experientially authoritative.

Truly, the Goddess has been appearing — in living color — everywhere and anywhere throughout this 3rd Millennium. The fresh perspective offered by this book simply illuminates that the Divine Feminine has always been here.  Not only has she never left, we walk on her by day, and sleep on her by night … since time immemorial.  Also known as Mother Earth in one of her more AWESOME manifestations, she is both the giver and sustainer of life.

The Gospel of Sophia also dovetails quite nicely with the Sophia of Jesus Christ (see Addendum), as it does with all the Gnostic gospels.  Not only does this exquisite work of revelation contain esoteric and sublime wisdom whose time has come, it has been written in a way that is most accessible.

Clearly, this beautiful tome reflects the purity and virtue and beauty of the Divine Mother herself.  This can only be the case because it has been produced by a true keeper of such sacred wisdom and vital knowledge.  In Tyla Gabriel the Universal Mother has found a worthy instrument by which the three aspects of the Divine Feminine can be intimately known and joyfully experienced.

Tyla Gabriel eloquently introduces the reader to the 3 primary manifestations of the Divine Goddess who are represented as Mother Goddess, Daughter Goddess and The Holy Sophia.  In this fashion it is quite easy to make the leap to the Goddess trinity in Eastern spirituality who are known respectively as Mahakali, Mahalaksmi, and Mahasaraswati. 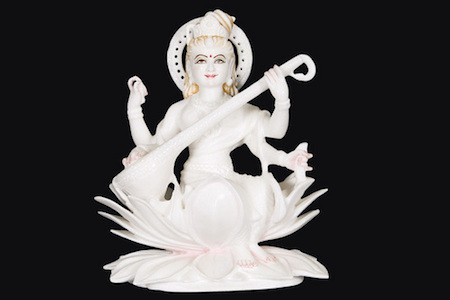 In fact, it is the great Goddess Saraswati, who is revered wherever Hinduism is practiced as the Goddess of Wisdom, Knowledge, Music and Learning. Saraswati is routinely extolled by those who seek excellence in the arts, and especially by those who selflessly aspire to be great writers and poets.  As the primordial spanda* of Lord Brahma the Creator God, Saraswati provides profound inspiration and limitless creativity to all who propitiate Her.

*Spanda = the original cosmic throb which eventually gave birth to the material universe out of the Void.  Each and every creative impulse is likewise a mini-cosmic throb spontaneously emerging from the depths of Supreme Consciousness.

Likewise, as the Goddess of Wisdom in Western civilization, Sophia inspires her devotees and supplicants to rise to the highest realm of divine wisdom and knowledge.  In this way she is considered to be, all at once, the wise sage who is the giver of knowledge, the knowledge itself, as well as the humble disciple who serves as the willing vessel which holds the sacred knowledge.  Additionally, The Holy Sophia is precious life experience itself, which is the divine crucible that transforms knowledge into wisdom by way of Sophia’s spiritual alchemy. 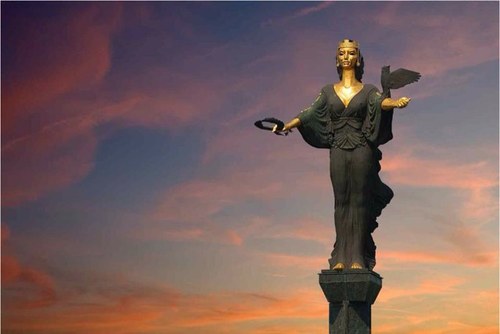 The following book description from Amazon.com provides a mere foretaste of the delectable delights which come with the reading of The Gospel of Sophia: The Biographies of the Divine Feminine Trinity (Volume 1) by Tyla Gabriel.

The Gospel of Sophia

For the first time in print the secrets of the Mystery Schools and highest yoga tantra concerning the primacy of the Divine Feminine Trinity are revealed through self-evident scholarship and inspiring, panoramic views of the three Goddesses. The biographies of a Mother Goddess, who created the world and is found in every creation story, the Daughter Goddess, who descended like Christ from heaven to redeem fallen matter, and The Holy Sophia, who travels along with humanity as it evolves, is told in detail with accompanying documentation that is historic and deeply stirring.
The three biographies of the Mother, Daughter and The Holy Sophia conclusively answer all cosmological, philosophical and theological questions about the divine that have engaged the hearts and minds of thinkers since the beginning of time. The Gospel of Sophia gives the reader an opportunity to see the divine pictured in ways that have never been offered in one book. Volume I is a source text that points directly to the reader’s ability to experience the divine through the thinking, feeling, and willing aspects of the reader’s consciousness.
The Gospel of Sophia is a Living Imagination of our time. Simple symbols and parables will bring the reader to experience Sophia in ways that have only been dreamt about before or described as inspirations that were not connected to a stream of wisdom that self-initiates the practitioner. The reader will move from an aspirant seeking knowledge to an initiate who begins to experience Sophia-Christos in a process of self-initiation. This vision of the Great Goddess is unparalleled in the literature on the current revelation of the Divine Feminine Trinity.
(Source: The Gospel of Sophia: The Biographies of the Divine Feminine Trinity (Volume 1) 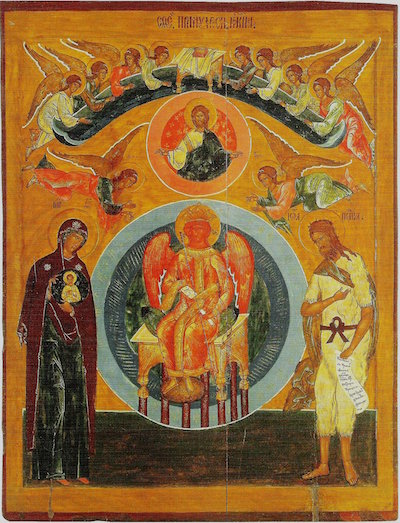 Icon of Sophia from St George Church in Vologda: Christ is represented above her head (16th century)

The Sophia of Jesus Christ

The Sophia of Jesus Christ is one of many Gnostic tractates from the Nag Hammadi codices, discovered in Egypt in 1945. The Coptic manuscript itself has been dated to the 4th century; however, it is complemented by a few fragments in Greek dating from the 3rd century, implying an earlier date. The text has strong similarities to the Epistle of Eugnostos, which is also found in the Nag Hammadi codices, but with a Christian framing added, and expanding it somewhat.

Most scholars argue that the text is of Gnostic origin, based on the similarities between the mystical teachings found in the text itself and standard Gnostic themes. Highly mystical, the content of this text concerns creation of gods, angels, and the universe with an emphasis on infinite and metaphysical truth.
(Source: The Sophia of Jesus Christ)