LORD KALKI
The Purnahuti of the
Vishnu Maha Avataras When Heaven Came Down To Earth

Every once in a great while an extraordinary and enlightened being appears on Earth when righteousness becomes the exception rather than the rule for human conduct. We call such a personality an Avatar, and in the particular context of Hindu cosmology, a Vishnu Maha Avatar.

Lord Vishnu is one of the three primary deities within the Hindu trinity who pervades all of Creation, supports the universe and maintains order throughout the cosmos. Since His last several appearances on Earth, He has been continually revered and loved as a living embodiment of God by His devotees the world over.

There have been nine major incarnations of Lord Vishnu according to most Hindu theologians, philosophers and historians, among His twenty-two plus earthly appearances that have been identified throughout the four major ages from the Satya Yuga to the present Kali Yuga. The last three Vishnu Maha Avatars to appear prior to the modern age, beginning with the most recent incarnation, are Lord Buddha, Lord Krishna and Lord Rama.

The tenth and final divine incarnation, known as Lord Kalki, has been foretold for centuries and portrayed in the lore of various cultures and religious traditions. Particularly as the Kali Yuga (our current era also known as the Iron Age) draws to a close, speculation about “the Kalki” is reaching a crescendo of hopeful expectation as well as apocalyptic apprehension.

Rarely does the Lord Himself incarnate and descend into human affairs. When He does, he does so out of love and compassion for His devotees. His explicit purpose for taking human birth is to transform the existing spiritual order — one person at a time — so that life for truth seekers will once again permit, and even encourage, the pursuit of one’s spiritual journey back to the Godhead.

Such a special time occurred on this planet during the last century in the wake of World War II. That earth-shattering war produced a generation of extraordinarily disaffected truth seekers who would never again accept the world as it was represented to them. They were known as the Beat Generation, and they were called Beatniks. The Beatniks were a unique group of extraordinarily courageous old souls who came down to Earth with a very serious mission.

Many of the Beatniks constituted a countercultural, iconoclastic and freethinking group of highly evolved souls who were determined and fierce in their search for the truth. They were equally avid in their pursuit of social equality, economic justice and political reformation. However, it was their ardent seeking for eternal spiritual truths and classic philosophical ideals that readied them to participate in the greatest mystical drama of all time – a story that will be told, and retold, with more passion and enthusiasm than any to come before it.

Whenever the Lord chooses to fulfill His preordained earthly mission, none would be more fortunate than those whose destiny it is to cross His path. Oh, what heavenly bliss and divine rapture to lay one’s eyes upon the Lord! Truly, what wonderful and great good fortune it is!

Such was the “great, good fortune” of the Beat Generation, as well as their younger hippie brothers and sisters – the first half of the Baby Boomer Generation. Whereas the Beatniks were often the newly trained swamis, teachers and mentors of the numerous Eastern spiritual traditions that took root in American society back in the 1960s and ’70s, their junior Baby Boomer collaborators were the industrious and devoted students, always willing to render selfless service for a great and noble cause as an outworking of their individual spiritual paths.

But before we tell any more about this highly auspicious meeting between Lord and disciples, let us review some momentous history which will both inform and contextualize this unprecedented modern-day rasa-lila. The “American chapter” of this story began with a most propitious invitation to one Swami Vivekananda. Swamiji was the foremost disciple of Sri Ramakrishna Paramahansa of Calcutta, a highly revered Bengali mystic and Hindu saint in the tradition of the Divine Mother (also known as the Goddess Kali). Vivekananda was an extremely accomplished and learned Vedantin who represented India as a delegate to the 1893 Parliament of World Religions in Chicago.

After his initial speech to a thoroughly captivated congress, Vivekananda’s talks and further participation in this event were quite eagerly anticipated by the mostly Christian audience with the excitement and reverence normally afforded to an authentic emissary of God—a real saint. The normally staid Christian audience ebulliently reacted to the turbaned Vivekananda as though he was a rock star. By all accounts, Swamiji was the shining star of the whole Parliament, and he received effusive accolades from every corner for his profound spiritual wisdom, fully baked understanding of world scriptures and truly ecumenical spirit. Subsequent invitations to speak flowed in from around the globe in the wake of his preeminent international reception.

This rare and fortuitous occasion, when Swami Vivekananda imbued such a unique global gathering with the true depth and breadth of Indian spirituality, could be construed as one of the most consequential happenings in the religious history of the United States of America, and because of its many far-reaching ramifications, the entirety of Western Civilization. In a phrase, this single kairotic event could even be considered an act of national spiritual awakening (collective shaktipat diksha) on the same order that any true prophet, genuine saint or yoga master had on their cultural audience during their public ministries.

How is it possible that such an extraordinary and enduring impact could be attributed to an Indian holy man steeped in an Eastern spiritual philosophy as foreign to the American mindset, religious sensibilities and spiritual orientation as Advaita Vedanta?

Before this question is addressed, it ought to be pointed out that Swami Vivekananda is only the first in a long procession of high spiritual beings from India who, by gracing American shores, served to quite exquisitely and selflessly set the stage for the most sublime event of the 20th century, and arguably of the last five thousand plus years. Each of these great teachers – to include Swami Ram Tirth, Paramahansa Yogananda, Maharishi Mahesh Yogi, Swami Rama, Yogi Bhajan and A.C. Bhaktivedanta Swami Prabhupada – had a significantly uplifting and enlightening effect on the American consciousness.

We speak, of course, of the same effect that Jesus had on Judea, Mohammed on Mecca and Medina, and the Buddha on those who peopled the plains of the Ganges. Further comparisons can be made to Lao-Tze, Mencius and Confucius’ influence on classical Chinese culture, Moses on the Hebrews, and Krishna and Rama on their respective ancient Indian kingdoms, among many other great masters and teachers who have appeared throughout human history.

It should be acknowledged that, as we telescope back through time and space, we see a whole firmament of divine beings who likewise had much influence on the momentous events we are about to describe. In fact, there are many illustrious saints from India, who never left that subcontinent, but by the sheer spiritual power of their high states of being, have had an enormous impact on this drama made in heaven.

Here we honor, with the utmost reverence and respect, the likes of Bhagavan Nityananda of Ganeshpuri, Swami Sivananda of Rishikesh and Sai Baba of Shirdi. There was also Ranga Avadhut and Ranchod Bapuji, Siddharudha Swami and Akkalkot Swami, as well as Zipruanna and Hari Giri Baba. We further acknowledge Neem Karoli Baba of Vrindavan, Anandamayi Ma of Haridwar and Ramana Maharshi of Arunachala, to name but a few of these distinguished Masters of Self-Realization.

The appearance of Lord Kalki always marks the end of the Kali Yuga, and lays the spiritual foundation for the following Golden Age. Such a magnificent divine incarnation is always accompanied by Lord Vishnu’s heavenly retinue from Vaikuntha. As such, there were many other great Indian saints and siddhas who existed during the last two centuries, some of whom quietly made their way to the West to help set the stage for the glorious rasa-lila of Lord Kalki.

It has long been prophesied throughout all the major religious traditions of the world that there would come a time when the current race of humanity would find itself in the throes of a tumultuous and terrifying end-time scenario. Each set of scriptural prognostications seems to have as its central character a divine personage who comes to the aid of faithful devotees in their time of greatest need and desperation. No matter where the religion, the society, the nation or the culture is located, or predominates, somehow this larger-than-life savior is expected to show up just in the nick of time to save the day, and especially deliver the true believers.

Everyone throughout Christendom has heard of the Second Coming of Jesus Christ, just as those in the Orient have heard of the prophecy of Lord Maitreya – the equivalent and future incarnation of the Buddha. Likewise, the Madhi is well known throughout the Muslim world as the eventual redeemer of Islam, just as the coming Messiah is still expected by those who practice Judaism. 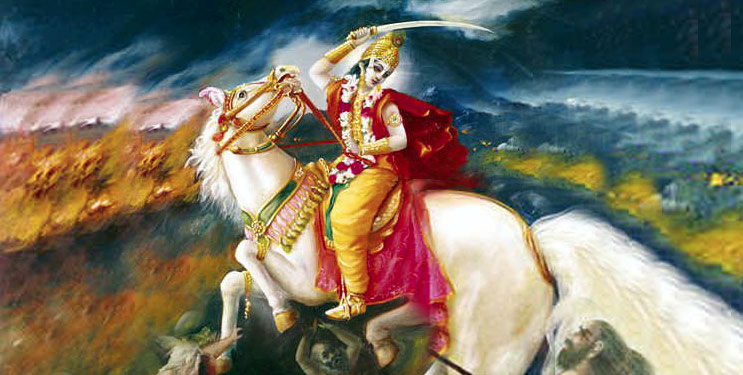 Lord Kalki as he is often portrayed on his white horse

What is less known in Western civilization is the common belief system wherever Hinduism is either practiced or understood. Hindu scriptures speak of a tremendously great being who will likewise appear on the world stage to enact a drama that has been foretold countless times. He is known as Lord Kalki, and very few will recognize him as the most spiritually powerful, life-transforming and awesome incarnation that the Lord will assume throughout the Kali Yuga. The relevant predictions, including the astrological circumstances of His birth, are presented in the sacred Hindu scripture known as the Kalki Purana*.

So, this is where we are heading – to the end of the Kali Yuga to meet the tenth major incarnation and final fulfillment of the Vishnu Maha Avatara – Lord Kalki.

Could it be that the Kalki is the divine incarnation of the very same Supreme Being of all the world’s major religions?

Might Lord Kalki be the revered deity fervently prayed to and eagerly awaited by all the world’s faithful and pious believers?

Only His magical 20th century rasa-lila is capable of revealing such a long sought after truth.

* “The Kalki Purana is a prophetic work that details the life and times of Sri Kalki, the tenth and final Maha Avatara of the Hindu deity Lord Vishnu. … The work primarily describes the onset and exponential increase of evil and sin on the earth during the Kali Yuga, and the life of Kalki, who is said to bring an end to the darkness of the Kali Yuga, destroying evil and sin, and beginning a new yuga (age) of sinlessness and peace known as the Satya Yuga.”
(Source: Kalki Purana)