“The greatest wisdom is in simplicity, love, respect, tolerance, sharing, gratitude, forgiveness. It’s not complex or elaborate. The real knowledge is free. It’s encoded in our DNA. All you need is WITHIN YOU. Great teachers have said that from the beginning. Find your heart, and you will find your way.”
—  Carlos Barrios, author of Kam Wuj

The Holy Trinity of Kali 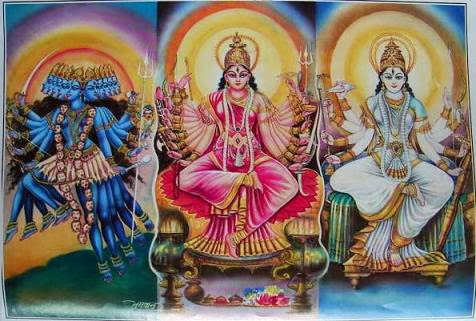 Each of the three Gunas is ever-present simultaneously in every particle of creation but the variations in equilibrium manifest differently throughout all of creation including matter, mind, body and spirit.

Mahakali’s mythology is contained in various Puranic and Tantric Hindu Scriptures (Shastras), where She is variously portrayed as (i) the Adi-Shakti or Primeval Force of the Universe, (ii) being identical with the Ultimate Reality or Brahman, (iii) the (female) Prakriti or World as opposed to the (male) Purusha or Consciousness, and (iv) one of three manifestations of Mahadevi (The Great Goddess).  The Triple Goddess of Hinduism really represents the three Gunas or attributes in Samkhya philosophy.  In this interpretation Mahakali represents Tamas or the force of inertia. A common understanding of the Durga Saptashati or Chandi Path (according to the Devi Mahatmya or “Greatness of the Goddess”, a later interpolation into the Markandeya Purana, considered a core text of Shaktism, the branch of Hinduism which considers Devi to be the highest aspect of Godhead) assigns a different form of the Goddess (Mahasaraswati, Mahalakshmi, and Mahakali) to each of the three episodes therein.

Mahalakshmi is the presiding Goddess of the middle episode of Devi Mahatmya. There, she is depicted as Devi in her universal form as Shakti. This manifestation of the Devi was empowered to kill Mahishasura and was formed by the effulgences (special powers) of all the gods. The Goddess is described as eighteen-armed, bearing a string of beads, battle axe, maze, arrow, thunderbolt, lotus, bow, water pot, cudgel, lance, sword, shield, conch, bell, wine cup, trident, noose and the discus sudarsana. She has a complexion of coral and is seated on a lotus. She is known as Ashta Dasa Bhuja Mahalakshmi.

In the Devi Mahatmya, Saraswati is in the trinity of Maha Kali, Maha Lakshmi and Maha Saraswati. She is depicted as eight-armed. Her dhyana shloka given at the beginning of the Fifth chapter of Devi Mahatmya is: “Wielding in her lotus-hands the bell, trident, ploughshare, conch, pestle, discus, bow, and arrow, her lustre is like that of a moon shining in the autumn sky. She is born from the body of Gowri and is the sustaining base of the three worlds. That Mahasaraswati I worship here who destroyed Sumbha and other Asuras.”

Now whether any of these Goddesses are mothers, daughters, or even grandmothers, it is important for religious purposes to recognize the Triple Goddess here.  Maha Kali, Maha Lakshmi and Maha Saraswati are in fact Maiden, Mother, Crone. Their descriptions may not match perfectly, but that does not indicate there is any contradiction. Each divine person of the Triple Goddess does not have just one, but rather a few different aspects which may seem to contradict each other, yet are all integral manifestations of the Triple Goddess. 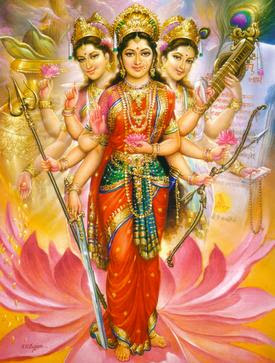 This is Tridevi, the official Trinity in Hinduism

The Tridevi (three goddesses) is a concept in Hinduism conjoining the three consorts of the Trimurti (Great Trinity):

Ø  Saraswati (Goddess of Knowledge and Wisdom) is the goddess of learning and arts, as well as cultural fulfillment.  She is the consort of Brahmā, the Creator.

Ø  Lakshmi (Goddess of Wealth and Abundance) is the goddess of prosperity and fertility, as well as material fulfillment.  She is the consort of Vishnu, the Maintainer or Preserver.

Ø  Kali or Parvati* (Goddess of Destruction and Change) in her demon-fighting aspect of Durga is the goddess of power and love, as well as spiritual fulfillment.  She is the consort of Śiva, the Destroyer or Transformer.

*Parvati — This is another name for the Tridevi Mahakali.  Parvati manifests Her wrath, for example, as Durga and Kali; and Her benevolence as Lakshmi and Saraswati.

Hail MahaDurga in the name of Kali, Lakshmi, and Saraswati.