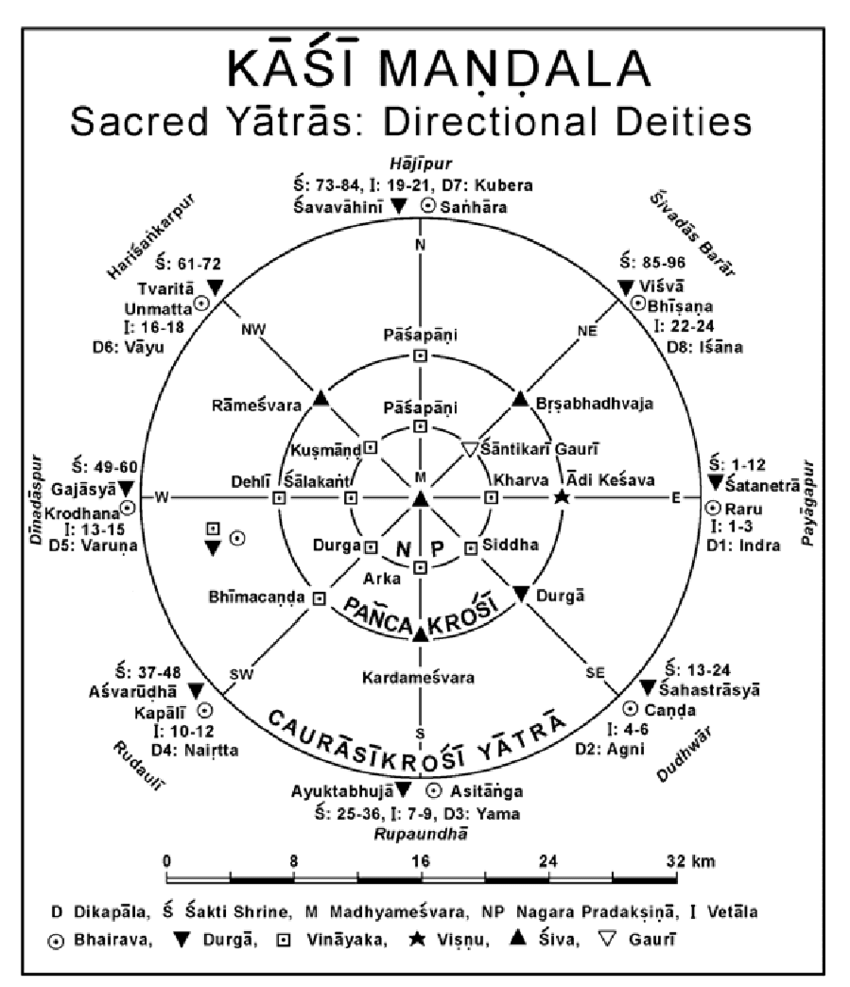 In the Oriental world sacred schemata (cosmogram) and related myths are basic concern in the evolution of holy centres. The city of Varanasi represents a complex mix of the cosmocised structure and local sacrality, and has grown without the support of sacred kingship. There exist fifty-six pilgrimage circuits, of which five are the most popular ‘and make the web of the cosmogram. All the pilgrimage circuits and related shrines and sacred spots symbolically represent some aspects of the man-cosmos relationship. The ultimate synthesis of cityscape represents integration of macro-, meso-and micro-cosmos at different levels. At micro level temple itself represents the cosmos. However, due to drastic demolition of temples during Muslim rule the basic structure has been lost. In a course of time these structures have been rebuilt and mythologies set to revive the ancient glories and mystic power. That is how the structure and network of sacred geometries became so complex that it is not easy to investigate. After all the tradition of pilgrimage and religious activities always continued and maintained. This helps to explain the complicated web of Kashi as Cosmogram. Key words. Cosmogram, cosmogony, holy city, framing, order and pattern, sacrality, sacred geometry.
The basic frame of the Cosmogram.
…
. Kashi: Pilgrimage Journey and the Cosmogonic Integrity
…
. Varanasi : Jyotira Lingas, Light-Manifested Forms of Shiva
…
Kashi Mandala. Sacred Yatras: Directional Deities
…
+8
Ruined portion of the old Vishveshvara temple, back part of present Jnanavapi Mosque (after Prinsep, 1832).
…