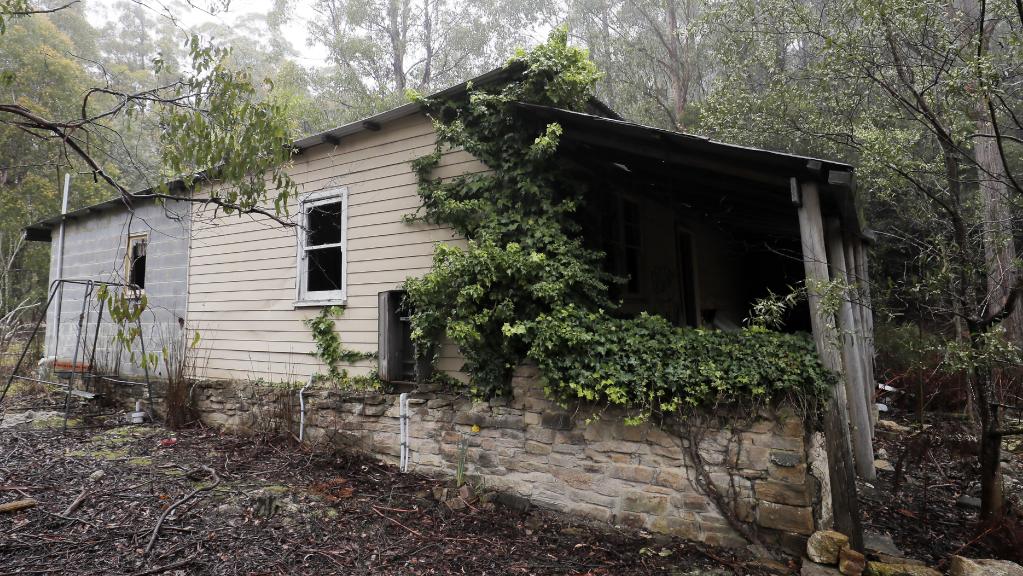 Up in the hills behind Margate, Bill Mollison built a house and a few outbuildings. Picture: RICHARD JUPE

IS this the place where the global permaculture movement was born?

Up in the hills behind Margate is an isolated property boasting a timber cottage, outbuildings and a couple of dams.

It is understood that this is where a young, disenchanted Bill Mollison came to get away from the world and to think.

It was 1972 and Mollison had fallen out of love with academia.

“I cut a hole in the bush, built a barn and a house and planted a garden, gave up on humanity. I was disgusted with the stupidity of the university, the research institutions, the whole thing,” Mr Mollison told the ABC in 2014.

That “hole in the bush” is a plot of land up in the hills behind Margate.

Nearby resident Ray Carroll discovered the sustainability guru’s “escape hole” when walking his dog, but it was only later he learned its history.

“It always fascinated me, this abandoned place up on Perrins Ridge,” Mr Carroll said.

“I have been walking up there with my dogs for years. It’s a great little place without houses, power, and a few small dams.”

Mr Mollison said he had a “eureka” moment in the bush.

“I started to realise that I knew a lot about physics but wasn’t applying it to how I heated my house. And I was an expert on ecology but wasn’t putting that into practice in my garden,” he said in the interview.

“I knew that I needed to convert the principles of environmental science into directives for planning. And then the idea of permaculture came to me.”

The world is now saying goodbye to Bill Mollison — a great Tasmanian and the man considered to be the “father” of permaculture.

Trees are being planted around the world in his honour — including 1000 on a farm in India — and there are plans to name a new road at a permaculture village in Western Australia “Mollison Way”.

The PlantAFruitTree social media campaign started at the request of Bill Mollison’s family, who put out the word that he wanted everyone to plant a tree when he died.

Mr Mollison, who died on September 24 at the age of 88, will also be remembered at the Australasian Permaculture Convergence in Perth next week when the man he started the movement with, David Holmgren, delivers his tribute to hundreds.

Mr Holmgren said his two-year student/mentor relationship with Mr Mollison from late 1974 changed the course of his life.

“Bill’s brilliance was in gathering together the ecological insights, principles, strategies and techniques that could be applied to create the world we do want rather than fighting against the world we reject,” he said.

“His personal life was as tumultuous as his public persona, at times tragic but always full of the passion and contradiction that the term ‘ecological warrior’ represents.”

Tasmanian permaculture followers are planning wakes to recognise the man who inspired them to join in a quiet, sustainable revolution. Mr Mollison’s funeral will be a private family affair, but Tasmanians will also get a chance to say goodbye at a public memorial. A date is yet to be set for the memorial.

Penguin permaculture convert Caroline Smith has been asked by Permaculture Australia to organise a basket of local produce to take to Bill’s widow Lisa when she gets back to their home at Sisters Creek — a simple gesture to show how much Bill was respected.

“I did not know Bill well, but I read a lot of his stuff and it inspired me and many, many others.

“We came to Australia from the UK in 1983 and someone showed me a copy of Permaculture One and I thought ‘this is amazing’.

“It is just such a sensible and sane way to operate, to live.

“We have been in this house for three years and are working to get the place sustainable in terms of energy and growing our own food.”

Bill Mollison had a quick wit, strong views, what some have called a “confronting character”, and a way of making the complicated simple.

“Though the problems of the world are increasingly complex, the solutions remain embarrassingly simple,” he said.

Bill Mollison was born at Stanley and spent his final years at Sisters Beach before dying peacefully in Hobart.